eborah still felt a little shaken by the phone call. Scanning the room once more before vacating, she absently released a pent-up sigh and picking up her car keys and suitcase she mumbled, “Yeah, this is it. I’m out of here!”

She checked out of the hotel quietly as she normally would have done, but not waiting till the usual check-out time of 11:00 am. Also, restraining herself, she left without giving them a piece of her mind, remembering Mark’s caution ~ “draw no more attention”.

Stepping outside she glanced at her watch. Almost six in the evening. As she pulled away from the hotel she thought that this was the right thing she’s doing. ‘Get away from here and fast!’, she reflected. She drove away, though, with bittersweet kind-of-all-mixed-up feelings. What a day it had been! That phone call was really frightening. And all the things Mark had revealed. As her mind played back the disturbing hours, she couldn’t help noticing the contrast of the pretty scenery as she passed. The palm trees. The sea. Shops. People were going about their everyday lives all around her as she headed toward the expressway. She longed for normal times again. When she hit the throughway she let the window down. The sun hadn’t set yet and the breeze felt good in the sub-tropical humidity. Nothing but straight highway ahead for a while. Somehow that felt good at this point, too. Time to think and just unwind from all this mess. What was missing? Music! She leaned over and hit play,

“Smooth Operator” was playing. It was easy listening sophisti-pop music by Sade. She’d loved that song
from 1984. It was the way she had

thought of Mark before everything had gone so dreadfully wrong. Those early years he’d worked so hard and yet it had seemed effortless to her. He’d managed to get the house she’d wanted along with the kids’ schooling. And all their debts were paid without going to their folks. He met people so easily then. Handsome. Popular. Street-smart. Danny seemed to be following in his dad’s footsteps. She grimaced at the memory of Mark’s revelation about Danny and a cheating scandal at school.

Oh Lord, she sighed. Then she reached up and unpinned her hair clip. She shook her head, letting her hair catch the breeze while running her fingers through it. Then she adjusted her position under the steering wheel as if that could help ease some of the building tension that came with the memories. Up ahead on the right she saw a McDonald’sTM arches. ‘That sounds good,’ she thought. ‘I’ll take a break.’

As she was pulling into the McDonald’sTM lot. She found herself humming some of the words from that song. She stopped. ‘I used to know that. How’d it go? Oh yeah’, ~ and she began to sing it . . .

She switched the ignition off and reached up to adjust the rearview mirror to see herself. ‘Yep. You need a touch-up. You can bet that Tessa does this before she enters a place.’ She smiled ruefully as she noticed a casually dressed young family dart inside. ‘Yeah, right. Tessa entering a McDonald’sTM after preening herself or not? The Senator’s secretary? The Dutchess? She probably wouldn’t be caught dead in a —–‘, she shrieked and jerked back at the sidewise glimpse she’d caught of the movement of a man at her window.

“Oh! Good Lord, Mark!” She let the window all the way down. “You scared the daylights out of me!”

“I’m sorry”, he shot back sarcastically, but he was laughing good-naturedly. “It serves you right! What do you mean?”

“What do you mean?” she turned back on him as she tried to regain her composure.

“Sitting here with the window down. You were so deep in thought and talking to yourself, you didn’t even know I’d approached.”

“I WASN’T TALKING TO MYSELF, YOU SMART ALECK!” Realizing she’d raised her voice, letting him know just how he’d ruffled her feathers, she recovered. “I was just thinking out loud, is all. I didn’t know that was against the law.” She could feel the flush creeping over her cheeks. She cleared her throat to give herself a moment more to calm down. ‘Compose yourself you little fool’, she silently fussed at her ego. Then giving her full attention back to Mark, she asked, “How’d you know I was here? And what do you want?”

He grinned the slightly crooked, charming smile that always slayed her, and gave her a wink, knowing full well that she was embarrassed and flustered. Avoiding telling her how he knew she was there, he quipped, “What do I want? Well, thanks, babydoll, I’ll have a quarterpounder with cheese…, uh, and large fries, and a coke. Can I get an apple pie too?”

She couldn’t help but smile. ‘Ok, Mister’, she thought while deciding to flirt right back! She winked and blew a kiss with her lips in a pucker that would shame Marilyn. “I’ll leave that up to you, you sexy thing.”

His eyes sparkled now as he looked at her. Drinking in this breath of fresh air … personality that he hadn’t seen in years from Deb.

She was still playfully speaking, “And when you place the order, darling, I’ll have a Big Mac, medium fries, and a sweet iced tea.”

He laughed as he opened her car door for her to step out. But then did a double-take to his right. She quickly looked to her left to see what had caught his attention. Tessa? But no!

A red pickup truck was slowly passing to go around to the drive-through.

Their eyes turned back to meet each other’s knowing look which seemed to convey, “it wasn’t him”, without either of them voicing the actual words.

As they entered the restaurant Mark
directed, “Go grab that booth back there in the corner.” It was near the

restrooms. Deb placed some paper napkins on the table to stake their claim. He brought her the two cups to get their drinks in and went back up to the counter to wait for the food. Only a few other people were eating inside. Deb took the opportunity to step into the restroom to freshen up.

When she returned, she was awe-struck as she stepped toward their table. Seated beside Mark was another gorgeous man. He looked for all the world like a movie star. He was dressed business-casual. Maybe running into Mark was coincidence. He was here for business. As she reached the table Mark stood up. The handsome stranger looked from Mark to her then also rose.

Deb smiled and nodded toward the stranger as she said hello. “Please, be seated.” She felt a flush again flaming her cheeks, but she loved being treated like a special lady – and in McDonald’sTM yet! The girls back home wouldn’t believe this one! She glanced back at Mark and couldn’t help thinking, ‘Well, Tessa’s doing a good job training you. You haven’t stood for me in years!’, before chiding herself for being catty.

Mark introduced the gorgeous hunk next to him as Alex Clark. “He’s my partner.” At Deb’s raised brow, now Mark was the one flustered. “He’s, uh, working with me, Deb.”

Oh? At what, she wondered. She took Alex’s measure with a long, sweeping once-over. An undercover man, she thought. A government agent she thought but decided to act as though he was there to sell Mark insurance.
“Oh, I see. Pleased to make your acquaintance.”

When Alex spoke it was with a beautiful French accent. It softened her again, a little. She was a fan of men with accents. “I just love the way you speak,” she purred, enjoying Mark’s irritation. “Where were you born?”

“Montreal.” His attention was fully on her and the furnace was turned up full blast. “It’s so nice to meet you, Deborah.” Before he could say more Mark’s phone rang and Alex actually peeked over his shoulder. “Is it her? he teased, your pretend wife? The cool operator?”

Mark pushed him back away from him and motioned for him to cut it out. “Hello? Yeah.” Pause. “Uh, well, I really can’t talk right now.” His eyes found Deb’s across the table.

Alex’s attention was still centered on Mark and his phone. “Better not make her angry,” he stage whispered. Deb noticed the playfulness in his manner. He was obviously very familiar with The Duchess. “Ask if she wants to speak to me?” Alex continued his pestering. Mark rolled his eyes. “Will you shut up man?!” Speaking back into the phone, “Yeah.” Then he lowered his voice, but Deb still heard him clearly. “I love you, too. Alright. Bye.”

Alex continued bantering non-stop, but Deb’s whole demeanor changed. That was Tessa phoning. And both Mark and his partner were charmed like little schoolboys. She felt anger rising as she played back in her head what she’d just witnessed. But wait! What? Alex had teased, ‘the cool operator’. And he had said, ‘Your pretend wife!’ ???

To Be Continued! xoxoxo 💋❤️ 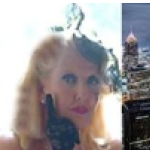